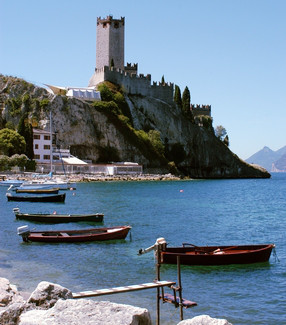 Malcesine is a small fascinating Medieval village situated on the eastern coast of Lake Garda.
It has 3.500 inhabitants and includes the villages of Cassone and Navene.
It seems that the etymology of the name comes from malus silex, the stone on which both the village and the castle were built. Malcesine was first a Roman village, and it was then fortified at the time of the barbaric invasions.
With the dominion of the Franks, King Pipino, who had gone to Malcesine to visit the two hermits Benigno and Carlo, stopped awhile at the castle.
The town became free city-state during the XII century but already in 1277 he belonged to Alberto della Scala and to the rule of Verona. The Scaligeri, Lords of Verona, rebuild the castle as it looks today.
They also founded the Capitanato del Lago, and then the Gardesana dell’Acqua which lasted until 1802, an union of semi-independent towns under the rule of Venice.
It belonged to the Repubblica Italica, to Austria and in 1866 it finally belonged to the Reign of Italt.
One of the most famous visitors of Malcesine was Wolfgang Goethe, who briefly stayed in the town in 1786. Another important guest was the painter from Vienna Gustav Klimt.